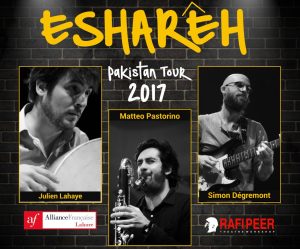 « The originality of The Ensemble Esharêh is to have succeeded in bringing together artists from diverse cultural backgrounds … While combining Indian sounds, chants of the Arab World and the Persian percussions, Esharêh reprises the musical and linguistic heritage of oral tradition songs from Upper Brittany countryside. By referring subtly to a possible link between the Eastern and Western cultures, these musicians regain cultural heritage
on behalf of a living oral tradition Esharêh in Farsi (Persian language) literally means “allusion” … ».

He is now a performer/arranger musician who developed a rare playing of high sensitivity. He divides his professional life between stage and teaching.

At 19, he moved to Paris to pursue his jazz education at the Music Conservatory of Paris. Amongst his teachers :
Nicolas Dary, Jean-Charles Richard, Emil Spanyi, Pierre Bertrand, André Villeger, Joe Quitzke. Summer 2009 was
marked by the Siena jazz, where he had the chance to study with Kenny Werner, Clarence Penn, Aaron Goldberg, Miguel Zenon, Jim Snidero. The ‘best musician’ scholarship also allowed him to study with Chris Potter.

In 2012, at the Saint Germain des Près jazz festival (Paris) not only his quartet won the spring- board 1st award in bands contest but Matteo, himself, received the Selmer prize for best soloist with a endorsement from the pretigious brand. Still in 2012, he was awarded the public choice prize and the 2nd prize at the International Jazz Soloist Competition of Monaco.

Julien Lahaye: Is a percussionist, but he is also the artistic director of « Esharêh ». First of all Julien was trained in African Mandinka music by the greatest Masters of the genre, he had the privilege of accompanying great African percussionist Masters (Mamady Keïta, Koungbanan Condé, Bolokada Condé.

Then he studied the fascinating playing of Iranian drums (Tombak, Dayreh…) with the great Masters Madjid Khaladj and Ostad Djamshid. Specialist of rhythms, he considers himself as a colorist percussionist. This is why he loves
combining his gestures and his sounds to every kinds of music but also with the forms of speech and dance.