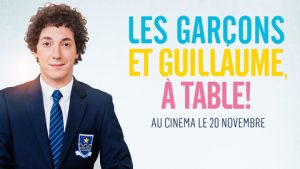 Les Garçons et Guillaume à table (Me, Myself and Mum) is a 2013 French autobiographical coming of age comedy film written, directed by and starring Guillaume Gallienne. The film premiered at the 2013 Cannes Film Festival and was released in France on 20 November 2013. In January 2014, the film was nominated for ten César Awards and won five, including awards for Best Film and Best First Feature Film.

Mrs. Gallienne, a rather temperamental upper middle-class lady, has three children, two of whom she considers as her sons and another she calls Guillaume. Logically indeed, the latter teenage creature does not picture himself as a boy, rather as a girl or at best as a homosexual. But how can a mother act in such an objectionable way? And why? Through a series of painful chain of experiences, Guillaume will discover little by little who he is actually and will manage to break free from her pernicious influence.